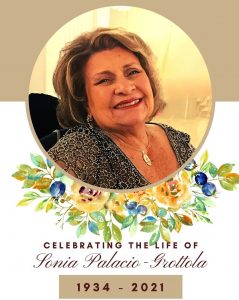 Ms. Sonia Palacio-Grottola was a long-time, committed member of the National Association of Social Workers NY State Chapter (NASW-NYS) and the Suffolk Division. She was also one of the founding members of the National Association of Puerto Rican and Hispanic Social Workers (NAPRHSW). She was deeply committed to supporting those in need in whatever community they resided. She did however, go to great lengths to advise those of her Latinx Community, especially those who did not have a strong command of the English language. Ms. Palacio Grottola’s greatest achievements were defeating the “English-Only Bill” three times in Suffolk County and serving as a board member of the Suffolk Center on the Holocaust, Diversity and Human Understanding.

She was adept at fund-raising for the scholarship accounts for both organizations. She was also very creative about it. The following story is a perfect example of her creativity. At our 2019 Suffolk Division Awards Brunch, we forgot to bring raffle tickets for the 50-50 drawing for the scholarship fund that year. Sonia would not accept the fact that we could not raise money that year. She came up with ingenious idea. She had us get looseleaf paper and cut them into strips. The strips were then numbered randomly. She had us write each number twice on a strip. Then she instructed us to cut each strip in half and put them into two separate baskets. She mixed up the numbers. Then we went around and sold paper strips with numbers to the attendees from one basket. At the end of the afternoon, she instructed us scramble up the numbers in the other basket and then we picked a number out of it. We raised a substantial amount of money that year to keep our tradition alive of raising money for the scholarship fund, all thanks to Sonia and her dedication.

Sonia always did whatever she could to uplift the NASW. She was very instrumental in working through her connections at the Brentwood CC so that we would get a great price on using that venue for our Division Awards events. Sonia also advised us that we could get an even better price by having the event on a Saturday afternoon rather than in the evening as we had been doing. In general, she was a bridge between NASW and NAPRHSW and the strong link that kept us forever connected. Though she is gone, she will never be forgotten and will always live in our hearts. Rest in Peace Dear Friend.